(*All photos and text on this site are protected by Copyright laws and are the sole property of Patriot Farm Boston Terriers, LLC. Photos and text found on this website cannot be used without written permission and may not be downloaded or used otherwise.)
​Being a breeder of any living being means so much more to me than just mating animals, it means that I am the custodian of the genes which make up that animal. My interest in heredity stemmed from my own family. My brother had blue eyes and neither of my parents did. My parents explained the inheritance of the genes that create eye color and it fascinated me. At my request my mother bought a pair of breeding mice for me. The breeding pair I chose were very specific and I documented the inheritance of their coat color, markings and temperament through two generations, I was about ten years old. That sparked my ever-growing desire to learn about genetic inheritance. My interest in sciences lead me to become a Registered Nurse, which has been my career for over 30 years and now I am living my lifelong dream of breeding and showing dogs.

Since as early as I can remember, one of my biggest dreams was to manage my own kennel and to breed great dogs. In 1992, while I was walking through the mall, I saw a dog in the window of a pet store that would change my life. It was a Miniature Pinscher. I put the dog on hold and went home to research the breed and to find a private breeder to buy a dog from. I called several local AKC show breeders and told them I wanted a Min Pin and was also interested in breeding- none were willing to help me get started at the time. So against all odds, I started out on my own and bought the ‘doggie in the window’ and competed right alongside the pros. He became a Champion relatively quickly despite being handled by a novice. His name was AKC CH Wilkums Rockafella, “Rocky”. Soon after that I went on to become Chairman of one of the Empire Miniature Pincher Club of Greater New York’s Specialty Shows, at the Pier in NYC, preceding Westminster, February 15th 1998. On October, 4th 1998 I had the honor of Judging the Empire Miniature Pinscher Club of Greater New York’s Specialty Sweepstakes, held on Staten Island, NY.

My first love being Dobermans I came to realize that there were recessive genes in Min Pins that caused blue and chocolate, being a big fan of red Dobermans, choosing a chocolate Min Pin was easy. I bought a 6 month old sweet chocolate girl named "Mocha" and, with determination and perseverance finished her. Mocha was an average dog and the newly accepted coat color of "chocolate" was not always accepted with open arms from the longtime breeders who didn’t want changes to the standard. I handled "Mocha" to her AKC Championship and then to her 1996 National Specialty Show Award of Merit achievement out of 300+ Min Pin entries. After having been over the road and in the ring with thousands of dogs and studying their conformation, movement and pedigrees, I learned which studs would be best for Mocha. Her pups were amazing. My most notable accomplishment was when one of her grandpups from “Armani” Ch Lorimar Valdon Designr Genes (Mochas son) won first Award of Merit at The Westminster Dog Show.

I stopped breeding and showing around 2002 knowing that I would return to showing and breeding once again when the timing was right. After learning that Boston Terriers were the first ‘American developed’ breed to be recognized in the AKC and that America’s biggest canine war hero was an early red brindle Boston Terrier named “Sergeant Stubby”! https://en.wikipedia.org/wiki/Sergeant_Stubby my interest was peaked on finding out more about the Boston terrier.

Being a very patriotic family the decision to go with this breed was further solidified when we realized how sweet, smart, empathic and endearing they are. A long time breeder, who was in the process of retiring started me with a few Boston Terriers. I chose several nice Boston Terriers from her — and Patriot Farm Boston Terriers was born July 4th 2018.

We show our dogs in two different associations. We show our all our Boston's in IABCA - International All-Breed Canine Association of America and we show our traditional Boston Terriers in the AKC.

The first AKC dog show for Patriot Farm’s Boston Terriers was on November 1st 2019 and Patriot Farm’s Independence Day, aka “Indy”, was awarded his first AKC points from the Bred By Exhibitor class.

I have well documented prestigious accomplishments as a breeder through AKC which proves I am absolutely qualified and capable of accomplishing great things with Patriot Farm Boston Terriers. We intend to develop our line of Boston Terrier Puppies in the original colors and the traditional colors with the hallmark TUXEDO markings, sound conformation and temperaments. 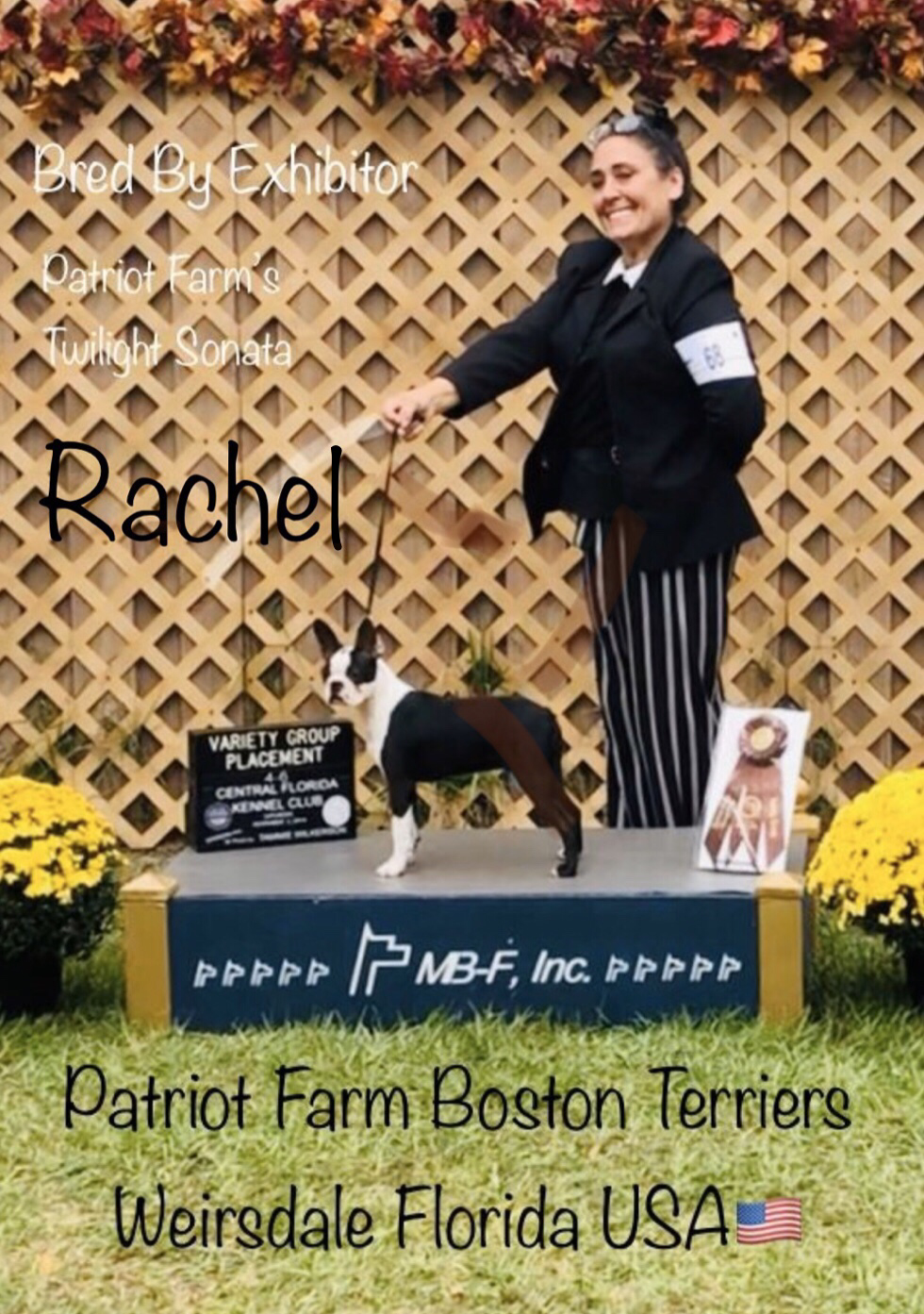 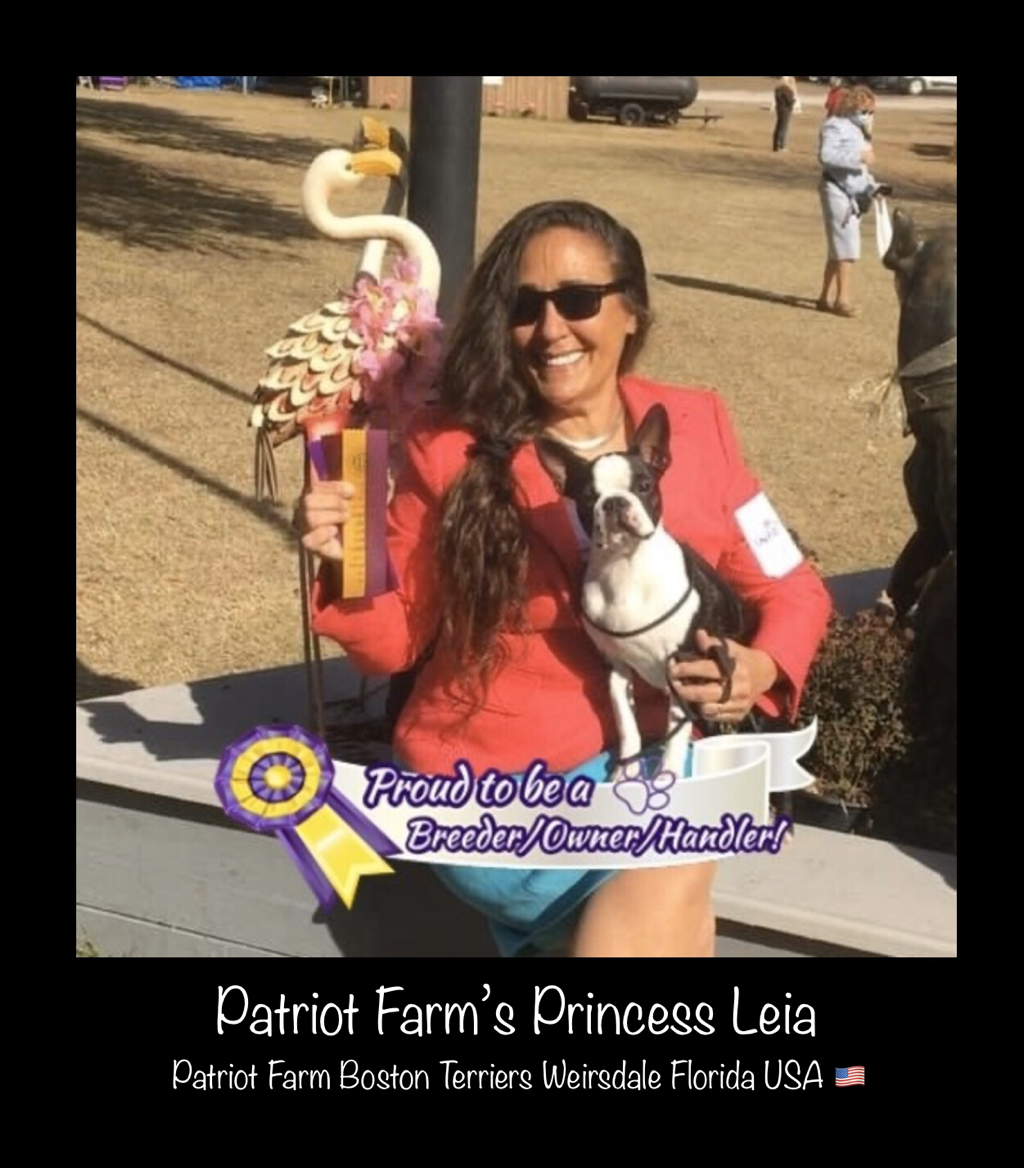 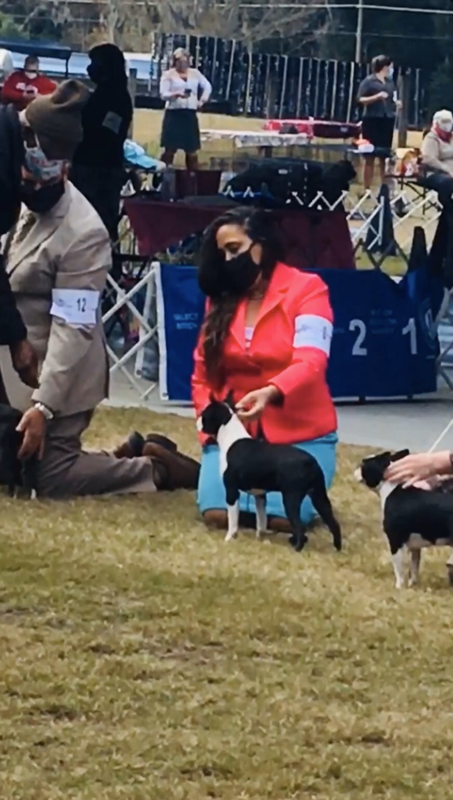 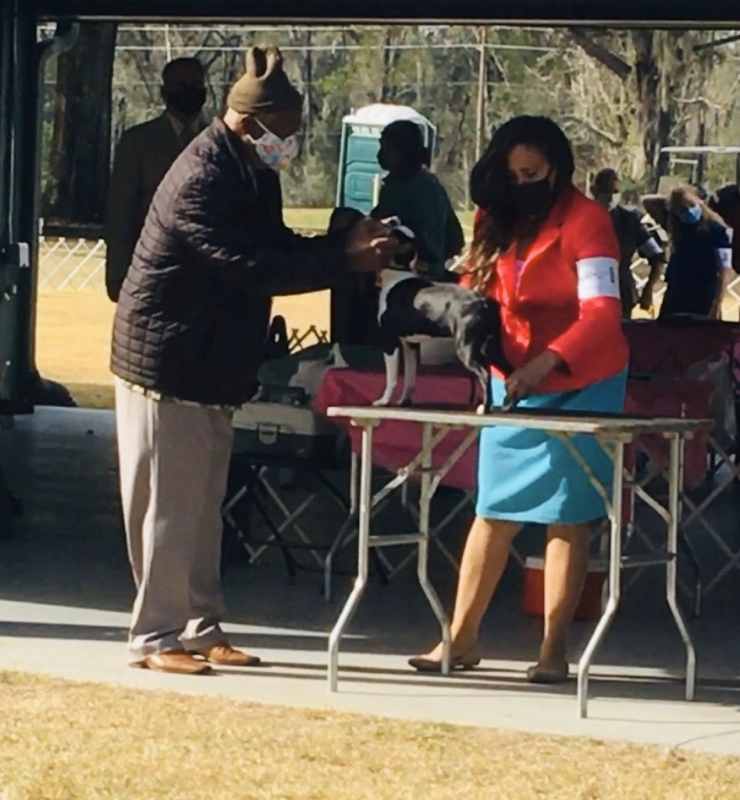 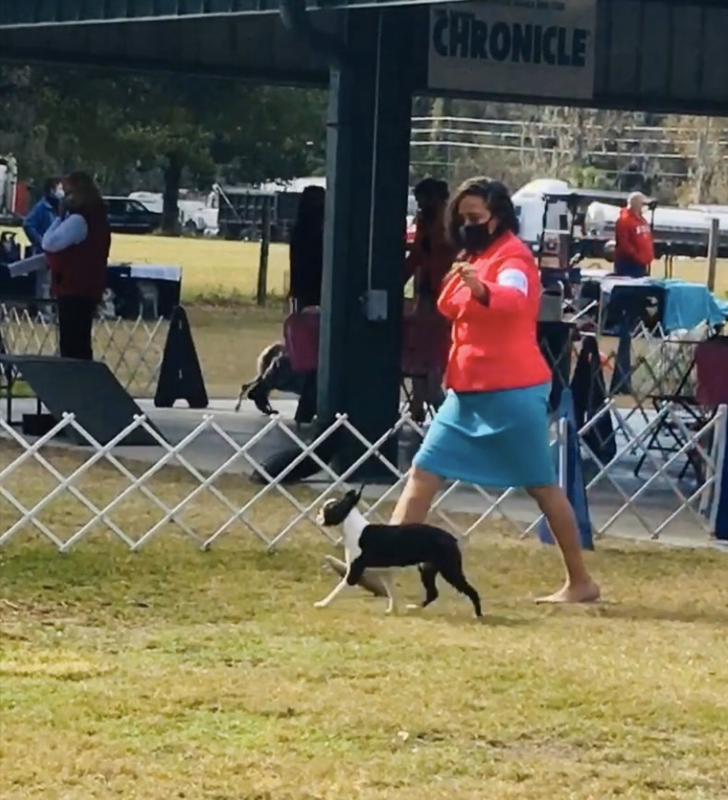 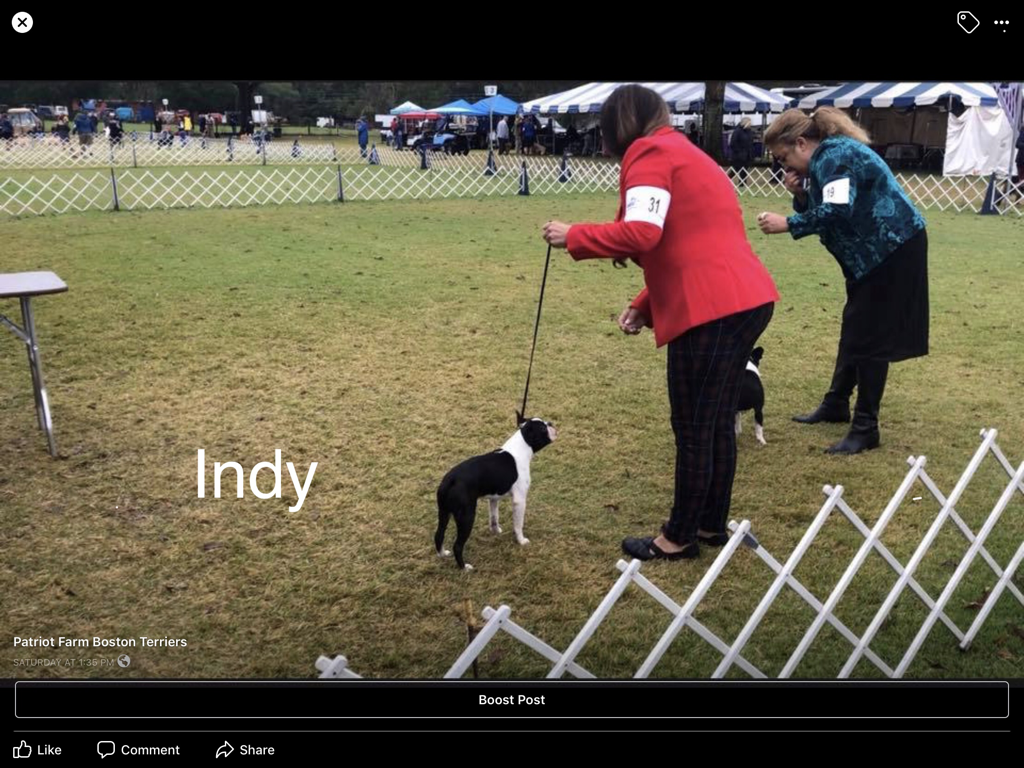 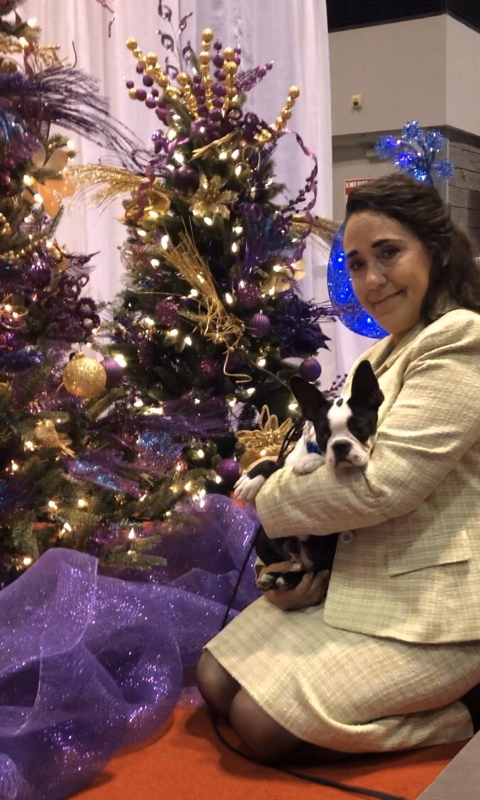 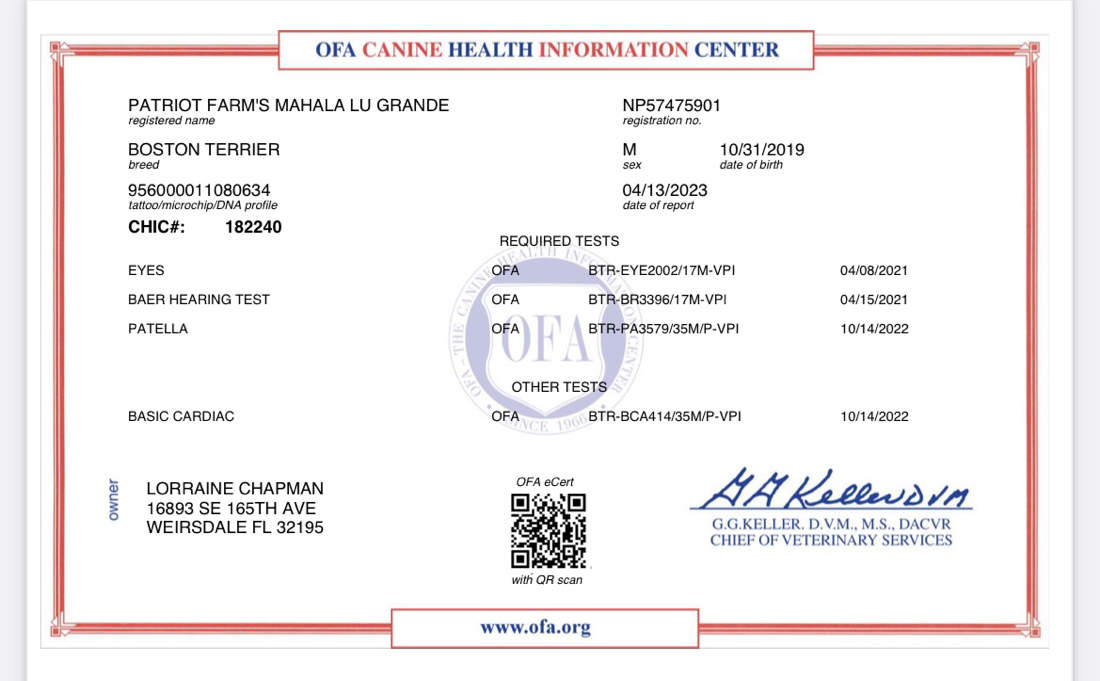 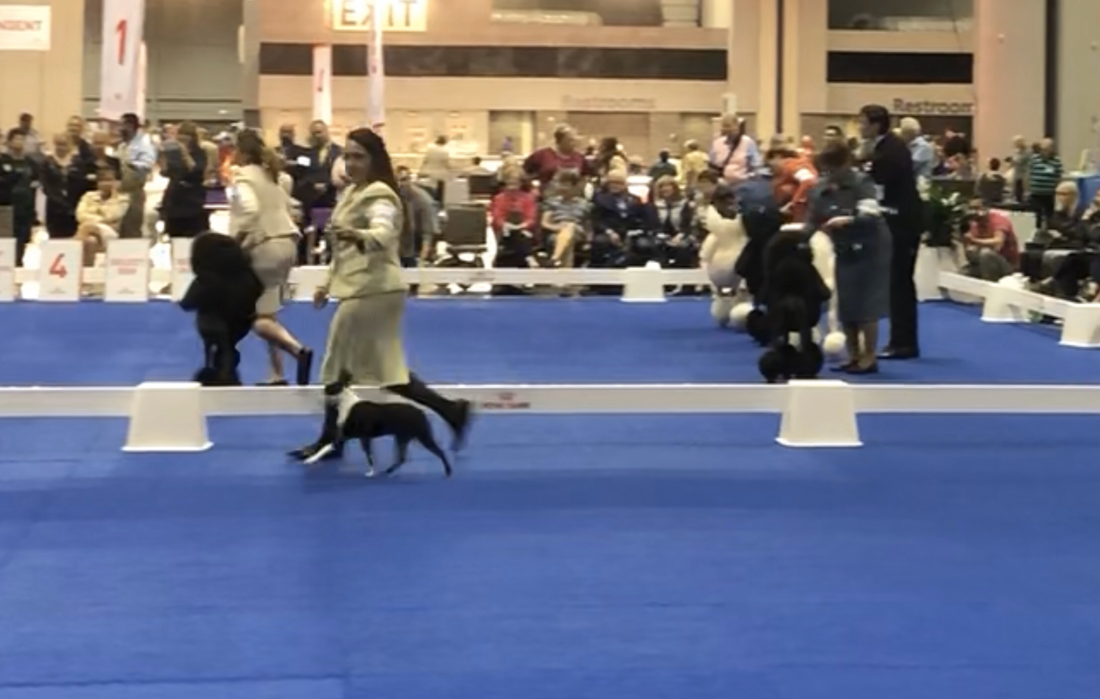 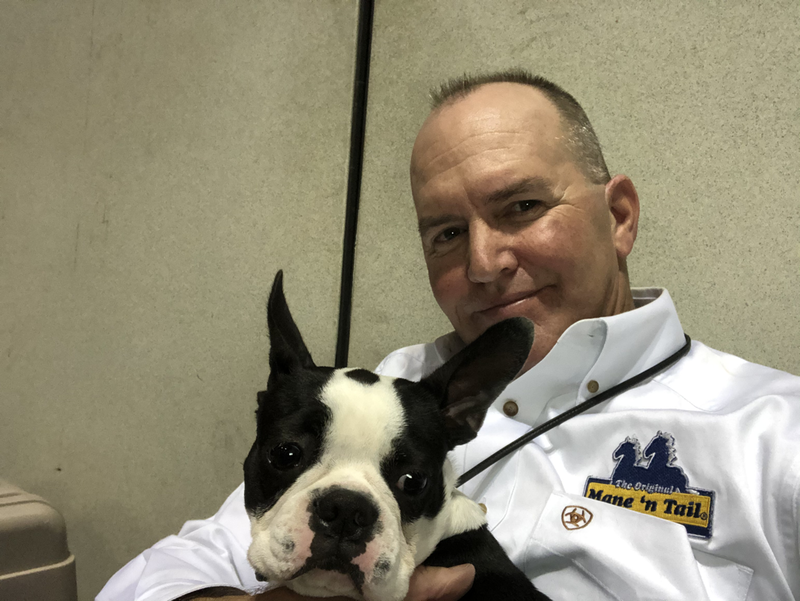 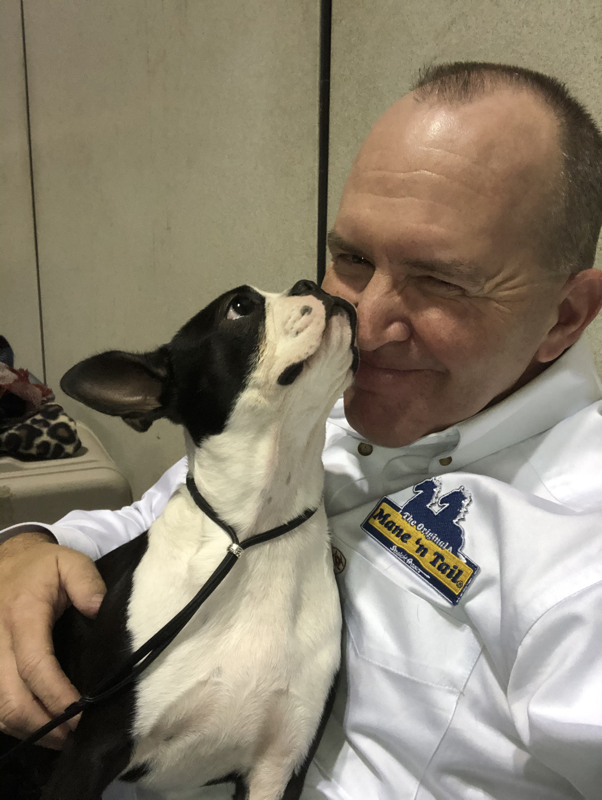 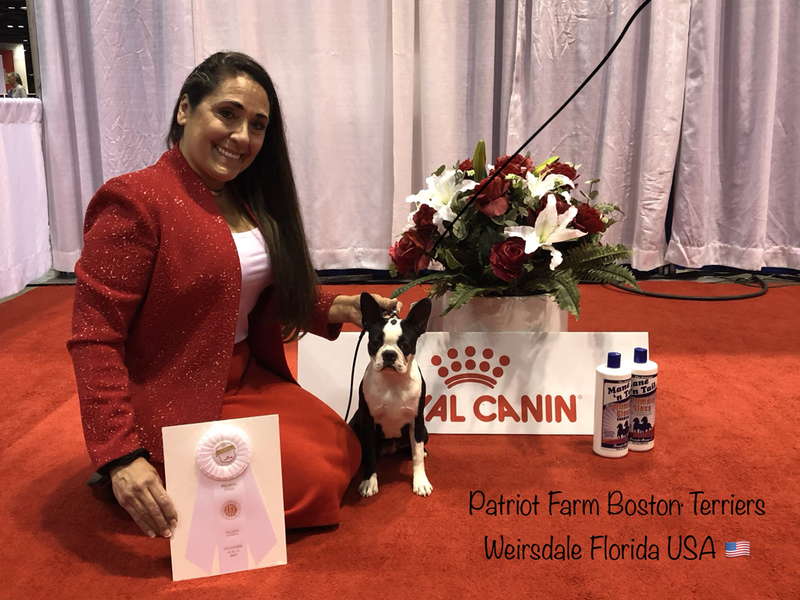 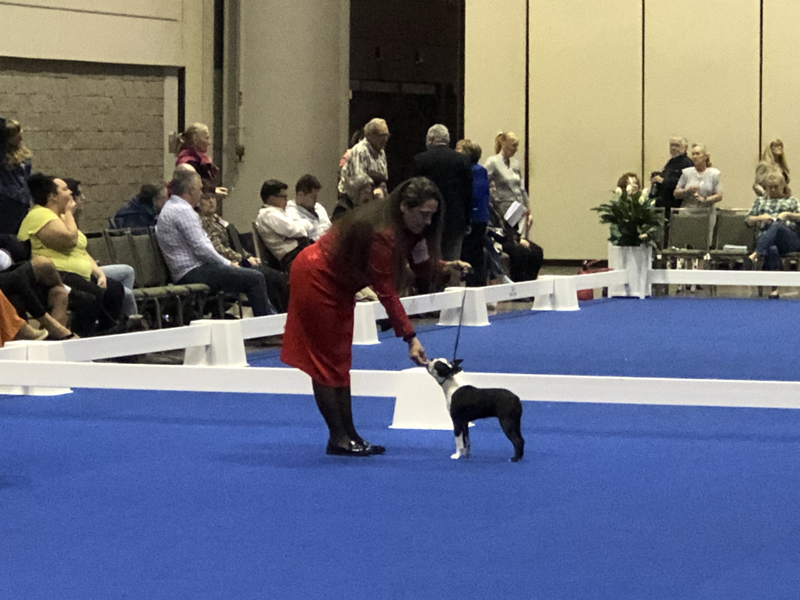 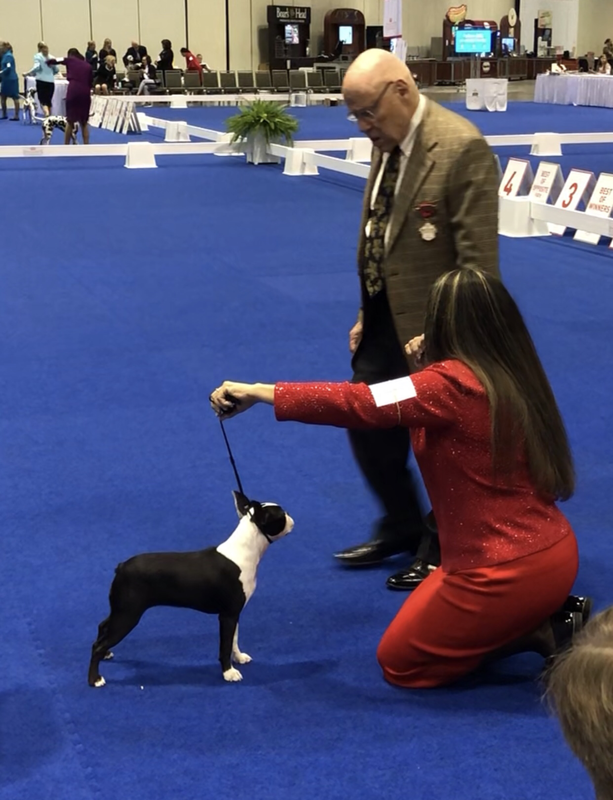 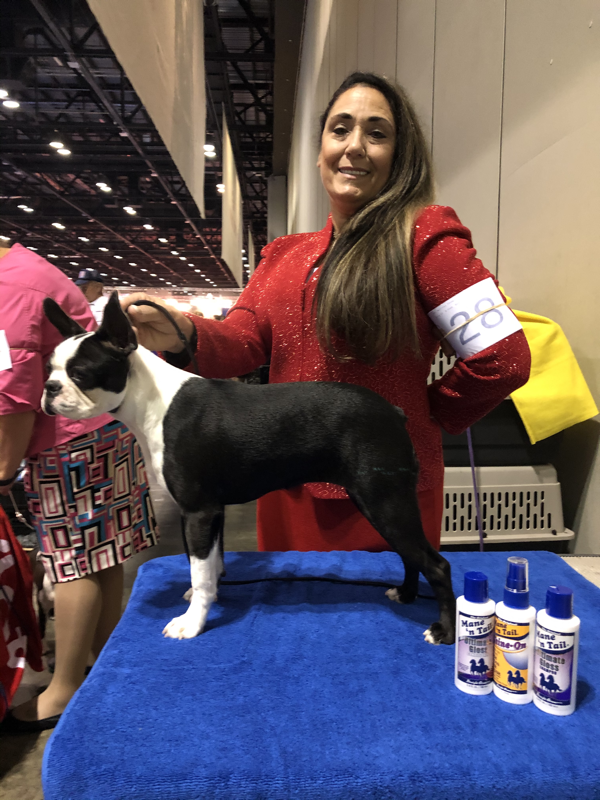 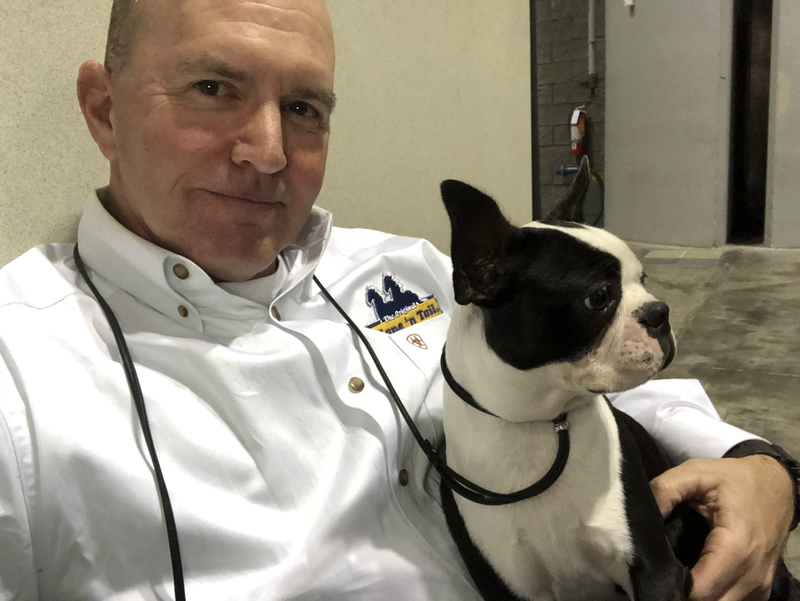 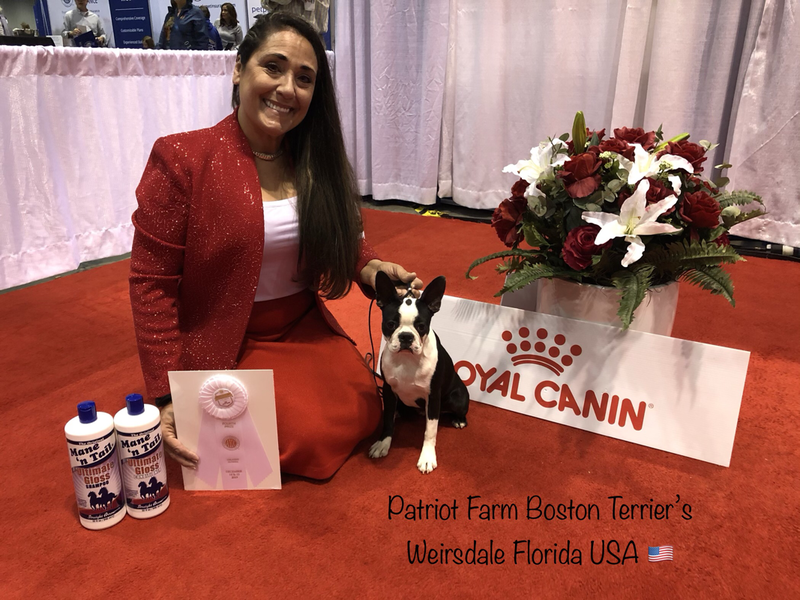 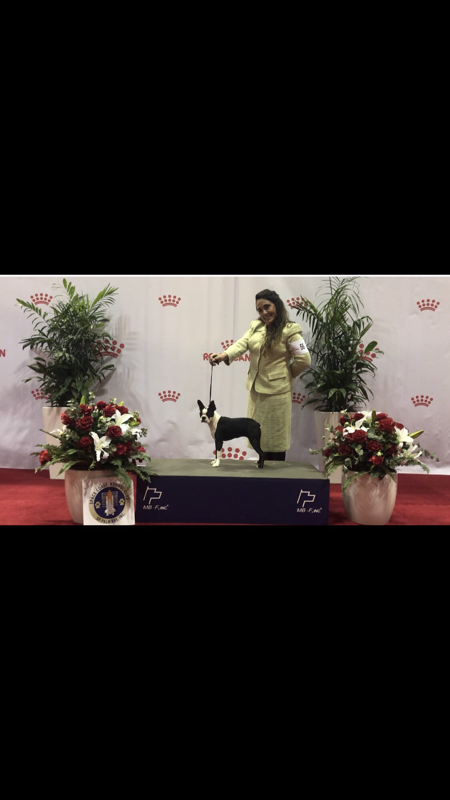 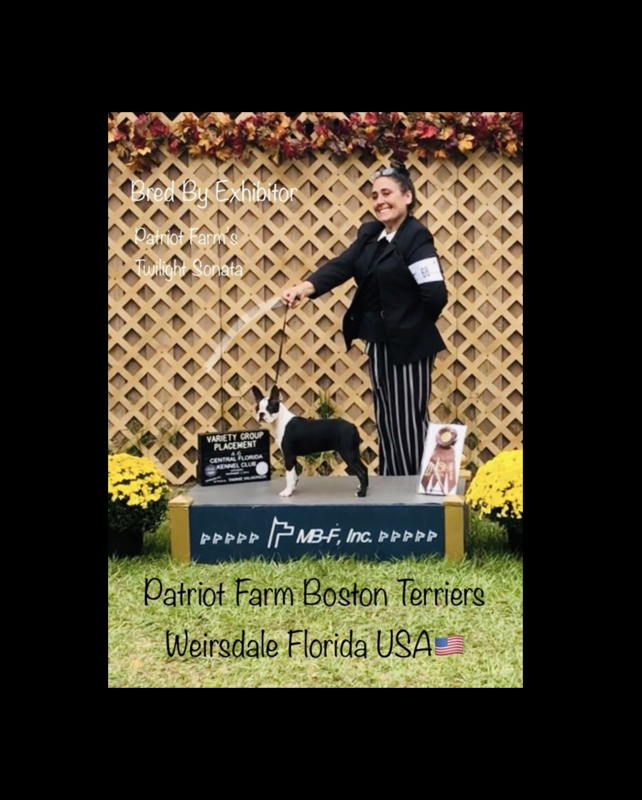 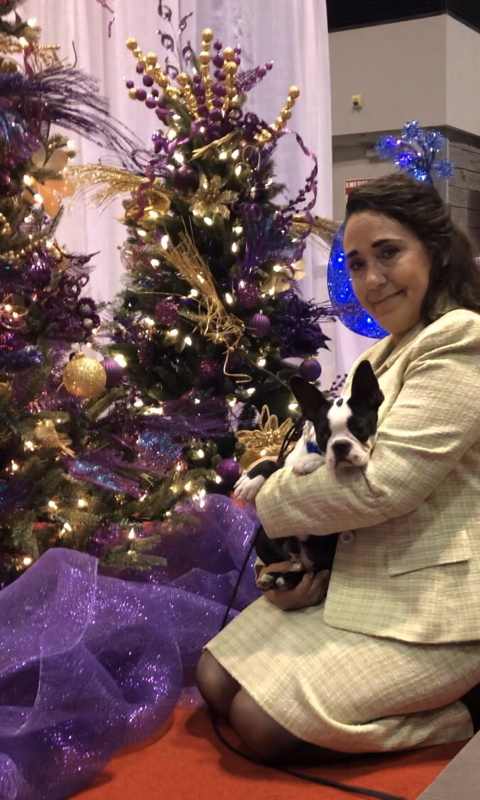 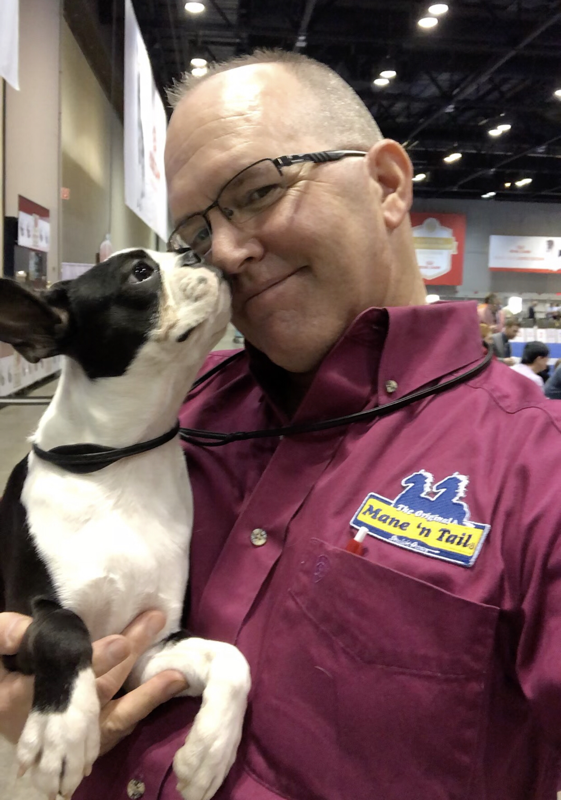 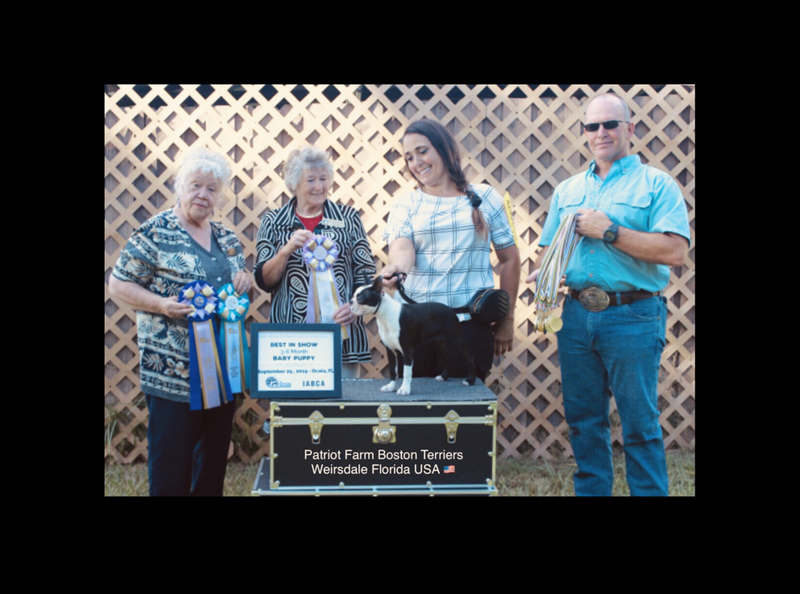 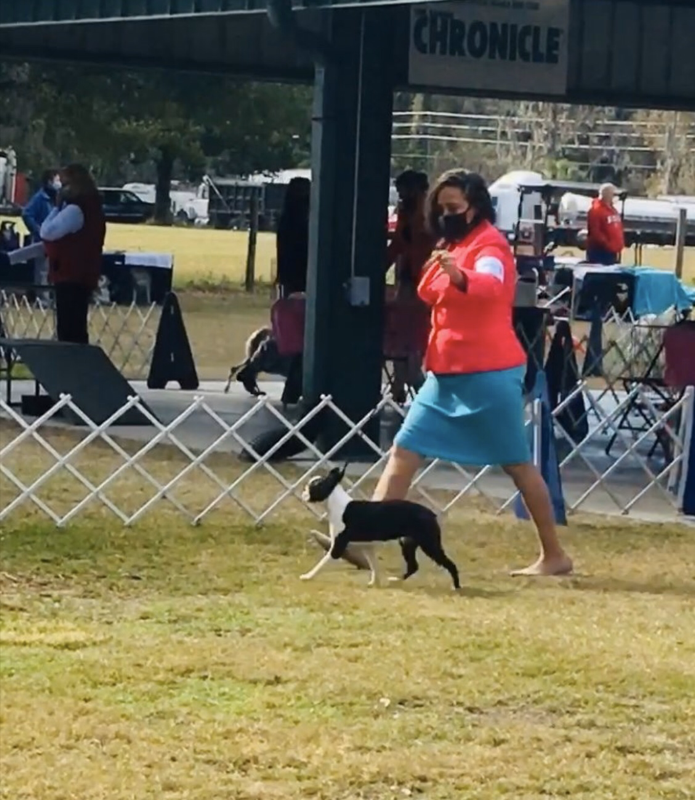