Patriot Farm is home to the “American Gentleman",
An Original American Breed - The “Boston Terrier” was the first
American-born breed to be recognized by the American Kennel Club 125 years ago.
We are preservation breeders of Boston Terrier Puppies - we love and care for our dogs at the highest level with respect and dedication to the breed. We strive to produce what you are looking for, the healthiest and most well adjusted puppies possible. We have traditional black and white, brindle and white, seal brindle and white Boston Terriers as well as the original colors.

​About our colored Bostons, we had genetic testing done to see which dogs carried the color genes, and we have been blessed with Blue and Chocolate in our lines. These were some in of the original colors for Bostons back in the late 1800’s. We strive to preserve some of the original colors rather than cull them. I do have Champion bloodlines as well to improve type these are my Black, seal and brindle and whites. All the colored Bostons are recognized and Registered with AKC however only the black, seal and brindle and whites are accepted in sanctioned AKC Breed Shows. This was a political move in the early 1900’s by a handful of influential breeders that petitioned to change the AKC Standard for showing because the dark colors brought more money and were sold quicker. I love Bostons and embrace their origins in color as well as the traditional colors. I actually appreciate the diversity in the breed. At this time our blue and white puppies are only offered on a select basis, and are very limited, we have chocolates a bit more frequently than blue.

Getting a new puppy should not be a quick decision. Most of the families who adopt from us are on our waiting list. Our Sires and Dams are selected for their sound minds and bodies, and we expect our pups to make the best pets and companions you can find.

We breed with INTEGRITY and we are PASSIONATE about what we do. We show our dogs and consult with esteemed breeders and Judges world wide. We spend thousands of dollars on genetic testing, yet we keep our dogs affordable. If we do not have what you are searching for, we will refer you, free of charge, to someone who we know is reputable and takes great care of their dogs just as we do and may have what you are looking for.

Puppies will come micro chipped for life with AKC ReUnite. We also offer a one year health guarantee for congenital defects that cause death and a lifetime guarantee against JHC, DM and HUU. If you would like one of our puppies, please fill out the puppy application so we can get to know you and see if you will be a good fit for one of our Boston babies.

We do not expect ALL of our clients to pick up their puppies in person. We have excellent references and excellent communication skills and through the use of technology and FaceTime we are easily transparent to bring you piece of mind when purchasing from us when you are afar.

GROUND TRANSPORT We can refer you to a reputable door-to-door ground transporter for special delivery of your puppy.

We are centrally located in Weirsdale Florida between I95 and I75, close to the Villages, and a short drive from Orlando and Tampa International Airports. 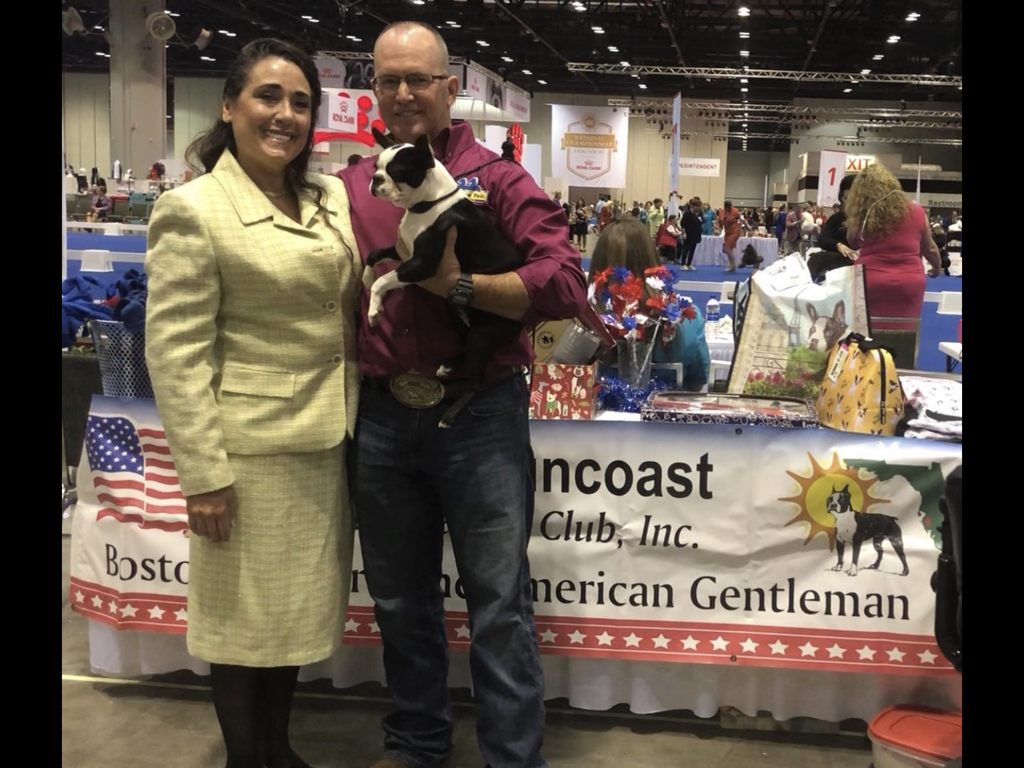 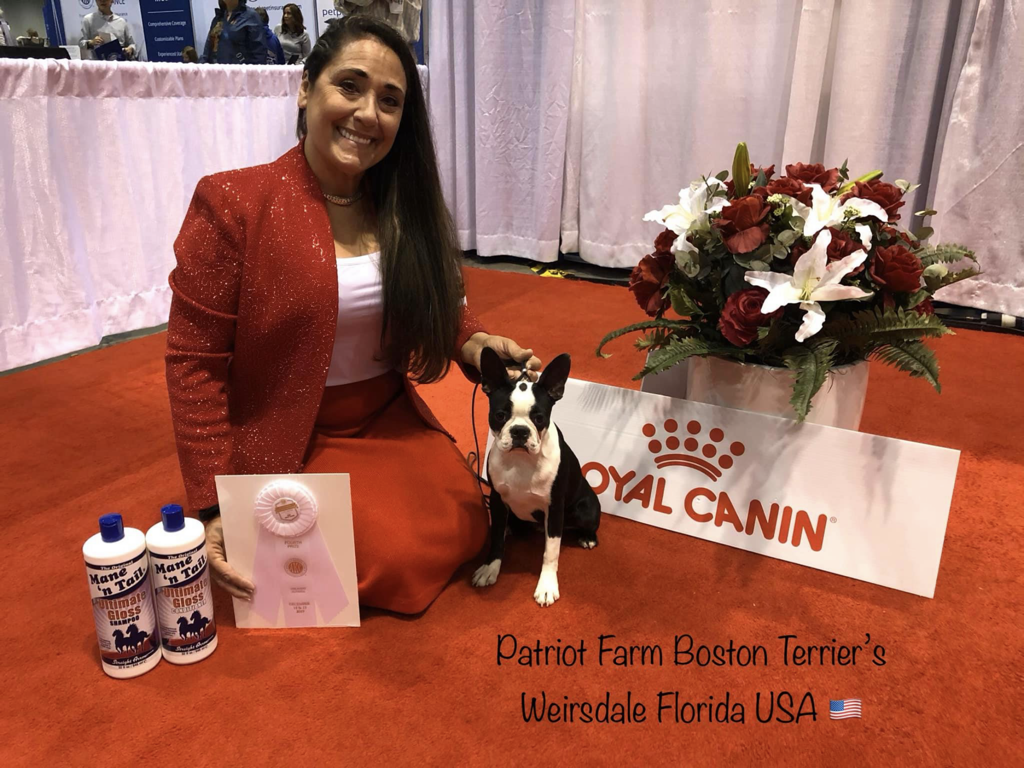 Being a breeder of any living being means so much more to me than just mating animals, it means that I am the custodian of the genes which make up that animal. My interest in heredity stemmed from my own family. My brother had blue eyes and neither of my parents did. My parents explained the inheritance of the genes that create eye color and it fascinated me. At my request my mother bought a pair of breeding mice for me. The breeding pair I chose were very specific and I documented the inheritance of their coat color, markings and temperament through two generations, I was about ten years old. That sparked my ever-growing desire to learn about genetic inheritance. My interest in science lead me to become a Registered Nurse, which has been my career for 33 years and now I am living my lifelong dream of being a breeder of Boston Terriers.

Since as early as I can remember, one of my biggest dreams was to have a kennel and to breed great dogs. In 1992, while I was walking through the mall, I saw a dog in the window of a pet store that would change my life. It was a Miniature Pinscher. I put the dog on hold and went home to research the breed and to find a private breeder to buy a dog from. I called several AKC show breeders who lived within about 80 miles of me and told them I wanted a Min Pin and was also interested in breeding- none were willing to help me get started at the time. So against all odds, I started out on my own and bought the ‘doggie in the window’ and competed right alongside the pros. He became a Champion relatively quickly despite being handled by a novice. His name was AKC CH Wilkums Rockafella, call name “Rocky”. He was a stellar example of a Min Pin. Then I went on to become Chairman of one of the Empire Miniature Pincher Club’s Specialty Shows at the Pier in NYC preceding Westminster and to Judge one of those Specialty shows as well.

My first love being Dobermans I came to realize that there were recessive genes in Min Pins that caused blue and chocolate and I was a big fan of red Dobermans so choosing a chocolate Min Pin was easy. I bought a 6 month old sweet chocolate girl named "Mocha" and, with determination and perseverance finished her. It was difficult, she was an average dog and the newly accepted coat color of "chocolate" was not always accepted with open arms from the longtime breeders who didn’t want changes to the standard. I handled "Mocha" to her AKC championship and then to her National Specialty Show Award of Merit win out of 300+ Min Pin entries. After having been over the road and in the ring with thousands of dogs and studying their conformation, movement and pedigrees, I learned which studs were prepotent. Mocha became mother of several AKC Champions.

My most memorable experience was when one of my puppies from my “chocolate” girl Mocha become ‘Runner UP’ for the most prestigious show in the world, The Westminster. Ch Lorimar Valdon Designer Genes, call name “Armani” won the First Award of Merit in the Best of Breed competition. It was such an honor to be validated as a breeder with this award.

My God-mother, Christine Tellefsen, encouraged me to consider Boston Terriers. After researching the breed, I learned that they were the first ‘American developed’ breed to be recognized in the AKC and that America’s biggest canine war hero was an early red brindle Boston Terrier named “Sergeant Stubby”! https://en.wikipedia.org/wiki/Sergeant_Stubby

We are a very patriotic family, and the decision to go with this breed was further solidified when we realized how sweet, smart, empathic and endearing they are. Linda Rucker, who was in the process of retiring from breeding, was willing to sell me a few Boston Terriers from her program and to give me breeder support to start my own program. I chose several nice Boston Terriers - a red/chocolate , a traditional black and a blue— and Patriot Farm Boston Terriers was born July 4th 2018.

We show our dogs in two different associations. We show our Traditional and original colored Bostons, such as the blues and chocolates, in IABCA - International All-Breed Canine Association of America and we additionally show our traditional Boston Terriers in AKC shows.

The first AKC dog show for Patriot Farm’s Boston Terriers was on November 1st 2019 and Patriot Farm’s Independence Day, aka “Indy”, was awarded his first AKC points from the Bred By Exhibitor class.

I have well documented prestigious accomplishments as a breeder through AKC which proves I am absolutely qualified and capable of accomplishing great things with Patriot Farm Boston Terriers. We intend to develop our line of Boston Terrier Puppies in the original colors and the traditional colors with the hallmark TUXEDO markings, sound conformation and temperaments.

We specialize in the ultimate all American family companion. We put a lot of love, care and attention into raising our puppies, and endeavor to match them with the right families so that they may enrich each others lives.

We have added two more extraordinary boys to further improve our line. We have high hopes to have accomplishments in IABCA and the AKC.

​We are proud Americans and give a military discount of $100.00 off your purchase to those who have served our country, active or retired and this is extended to Nurses as well.

We are also a Christian family, and thank the Lord for our Blessings and for allowing us to have such a blessed life with what brings us such Joy.

​We pray that we produce what it is you are looking for.
​
Lori Chapman
patriotfarmbostonterriers@gmail.com

​Here is a pictorial of some of my past experiences and accomplishments in the sport of dog showing and breeding.